Conditioned Humans. Don’t talk to strangers. Don’t trust someone. Don’t drink or eat if a stranger gives something. Keep guarded all your worldly possessions and stay wise.

But in the Golden City of Jaisalmer, I was taken by the hand and led by the heart. Read the story of Deepa, my child guide in Jaisalmer.

During my term at Art school, our class had the chance to go to the awesome tourist city of Jaisalmer in Rajasthan. Shooting practice is what it was called. The month as I recall was March – just in time for the desert festival. Sunny days and pleasantly cold evenings.

In photographic terms, I was a freshman then. Much like the kid who tries to palm fill as many goodies as he can from the tray, I wanted to shoot pretty much everything that I saw. Fill the card!! was the cry. Loud and clear. The plan was to shoot the best pictures that Jaisalmer would have ever imagined – in 5 days, I would have the most amazing collection of travel pictures ever. Yep – all done and dusted. Hero status checked. Now just that shutter needed to be pressed.

But as I stepped out to make those amazing photographs, all was a maze. Places like Jaisalmer have the problem of plenty and I just could not fathom what and where to begin. A day and half went by as I walked by absolutely confused, shooting whatever I could lay my hands on. Hardly what an aspiring documentary photographer would do. I just didn’t fathom the enormity of the place.

Walking in the streets, making my way to the fort, fellow Fseven photographer Bhagyashree Patki and I crossed a residential space. The common folk place. Mix of houses and affluence; a big white 3 floor house just opposite a small one floor house with an open terrace. BP took some pictures of the locked house door, when we heard the voice “hello!! would you like to see my house?”

A girl, maybe 12 – 13  years, standing across the ledge of the house, adjacent to the door. We hadn’t noticed her; she saw us. “My name is Deepa”, she answered when BP asked her. Deepa invited us inside the house, encouraged us to shoot pictures. She sat on the steps in front of the door and smiled wide. “I can take you around”, she said.

Then Deepa walked us around. She took us to all the places that are worth an eye in Jaisalmer and took us to people who we would have missed. Like this person who has a long moustache. I mean you have to see it to believe it. She made me meet the wife of a local musician who plays the Ravanhattha; this lady does not know how to speak hindi properly; cannot read or write but can converse fluently in French and German as she needs to engage with the tourists. I could not converse with her as I do not speak either of the two.

The Lady who spoke french and German fluently. ©KartikayaNagar

Deepa walked us to certain rampants of the fort which we would have skipped in the usual course of events. And we saw Jaisalmer from the top. The day came to an end; she went home; we came to the hotel.

One of the points that Deepa took us to. ©KartikayaNagar 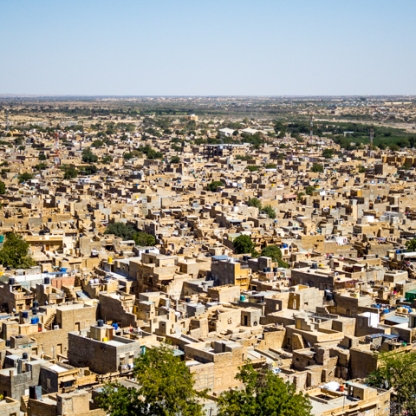 Photos from my trip to Jaisalmer

The next day we met again. While my memory fails me in the exact sequence of events but this was when we went to the Havelis – Patwon and Nathmal. Both havelis are significant and are a must do as they unfold the architecture and history of Jaisalmer. The evening brought a visit to the Gadisar Lake, calm and serene.

My fondness for Deepa grew. As did my curiosity about her. She was wonderful company, much like a pot of gold that you find in a desert. We visited places; she would talk endlessly;I answered selectively. Her comfort and confidence was amazing; I was more concerned about her staying out alone than she was.

One evening as we returned from another sojourn, we happened to fleetingly meet Deepa’s father and grandmother. A longer meeting with her father took place the next day when Sachindra, BP and I visited her house. Her father shared stories about the place, himself and his wife who was out visiting some relatives. He told us about his passion for being photographed and that he had acted as an extra in a couple of Bollywood movies and managed get himself clicked with Salman and Aamir Khan. Fancy that!! He opened up to us warmly. Not able to stop myself, I asked him if Deepa’s free spirit troubled him? “Not at all”, he said, “she is smart enough to sell a man on the street!!!”

Deepa’s company had given me the direction of what to see in Jaisalmer. I went to the fort area and walked the small streets inside. As I walked by a thin street, someone welcomed me. An elderly gentleman seated on a chair on the front porch of his house. His house was blue in color. All the walls. He stayed there with his family. I shot some pictures and left. Later I got them printed at a local printing shop and gifted the same to the gentleman the next day.

We were in time for the desert festival. A short drive out into the wilderness brought us to the desert, full of sand that changes colours with the sun. The camel races were the first events of the evening and a sight to see. Do you know the feeling of exciting anticipation? I felt it the crowd that day. The group’s racing their camels lined them up on the far end of the horizon and as soon as the shot went out, the camels galloped to the finishing line towards our side. Travellers delight!!! 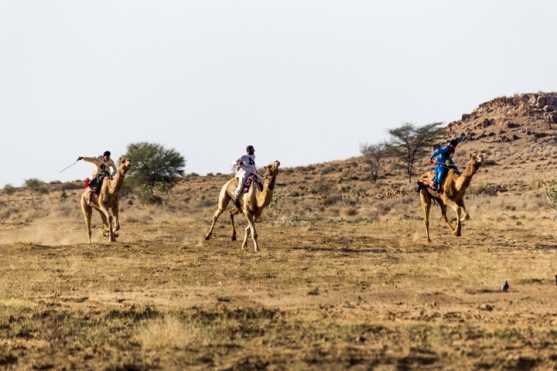 I spent the next day in the fort. The Golden Fort as it is known, is a huge property now divided between the Govt and the Maharaja of Jaisalmer. Some of it is available for tourists to see. They have a handy feature to explore these places – a guide microphone – an instrument with preset recordings and headphones. Put them on, walk around the place and press the number that is displayed nearby. The entire story around that part of the monument plays out in the phone. And with music!! Within the fort, amongst many things to see and stories to hear, the one I remember most vividly was the act of Jauhar. Jauhar is a mass suicide committed by the women of the royal clan and families affiliated with the clan just before enemy forces enter their areas. Jaisalmer has been unfortunate to witness two such Jauhars. In the last Jauhar, as the men did not have the time to build the pyre in which the women would jump; so they decided to slit the throats. In the audio this was described as a sad but brave act. I still think about the same.

Another highlight in the fort was this a three dimensional map of the Jaisalmer fort which explained the architecture, design and logic of the construction. The fort was built at a height for protection. Within the high walls is a well designed waterways to ensure smooth flow and conservation. But as I saw it, the locals are now conserving water like this. Many places within the fort city have now been converted into homestays and restaurants. We had lunch in one such restaurant where the owner was one – in – all. He took the order, served us the drinks and food and then settled the bills. This was a lovely roof top restaurant; unfortunately I don’t have the name and pictures.

I was reunited with Deepa in the evening and we went to a local fair. Lots of rides and candy later, I convinced her to let me gift her a dress from the fair.

Parting day arrived. All of us went to met Deepa one last time to say our goodbyes. Deepa gifted us handmade cards with poetry in it. I requested her for a passport size photograph. I keep it in my wallet.

How much of conditioning can withstand the warmth of a heart. Not much, at least in my case. Three years and many incidents since I last met Deepa, but the time spent with her is well etched in my memory. And so shall it remain.

Things that I missed doing –

My tips for a tour.

P.S. – Its been up my mind to go back and give Deepa her pictures. May we travel to Jaisalmer soon.